After Satara, I once again got involved with other things, and other thoughts begain to occupy my mind about what to make for my diploma film. This subject, to me, was a film to be made after I finished the course. And so I began thinking about other options. One, a retelling of Farrukh Dhondy’s ‘Poona Company’ since it is set in those parts of Pune that I have explored a lot for people and locations, costumes and properties for earlier films. But I had to give that up, not only because I couldn’t obtain the author’s permission, but also because it appeared more and more to me to be a subject for a full-length feature film. Two, a personal comment on the state of the community as I saw it. But I couldn’t put a finger on what exactly what I wanted to say, and so had to abandon it. Three, a film on the Bohris, a community that fascinated me because of their similarities and differences with the Parsis. But I needed to find out more about their way of life, their culture, their issues and problems, and I just did not have enough time for that.

I also began thinking about the form of the film. I reflected that my interests tended more towards documentary and realism, and since the footage wasn’t enough to shoot a documentary, I thought of making a quasi-documentary, a documentary that’s made like it were a fiction film. I also thought of putting together a cinematic essay, but I was unable to define exactly what it would be.

With nothing really materializing into a script, I also thought of making a film that had no connection with Parsis, but again I was unable to come up with a subject that was a personal concern. And making a film just for the sake of making one was something I didn’t want to do, earlier experiences and results not being enjoyable. I thought about not making a diploma film than make one I was not interested in.

And then one day, I suddenly realized that the subject for the diploma film had been with me all along and that the constraints for the diploma film provided me with the perfect opportunity to make it. A radius of 200 km would not include the villages of Gujarat where the Parsis originally settled, but it would cover a large number of places in Maharashtra where Parsis had moved to later. Luckily for me, I found a really good reference book in Marzban Giara’s ‘Global Directory of Parsi Fire Temples’ which in addition to listing every existing agiary in the world (and those which had ceased to exist as well), gave details about where they were, how to get there, who was the panthaki (the priest in charge), what community facilities were available (like dokhmas and dharamsalas) and how many Parsis were left. In addition to Satara, Solapur and Ahmednagar, I now had Kalyan, Uran, Devlali, Igatpuri, Lonavala, Panchgani, Tarapore, Dahanu and Bordi. (Daund, though, was not mentioned.) And so, I began to research in earnest. 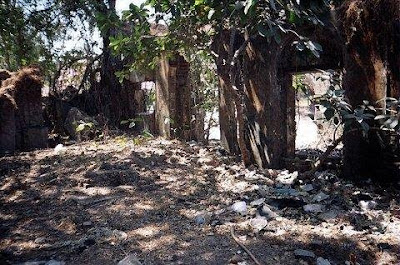 Inside the ruined mansion, Tarapore
Posted by Kaevan at 3:12 AM