My next stop was Solapur. Solapur surprised me. I was expecting to see crowds, chaos, congestion, confusion after my experiences with Nagar and Kalyan; instead, I found wide roads, little traffic, planned houses and little noise. The thought struck me, this was how Pune must have been when it used to be called the pensioners’ paradise, though not climate-wise. Solapur was hot and sultry.

At the agiary (which was locked, this was becoming a familiar sight), I met the Dhabhar brothers, two old priests probably in their seventies. The younger of them spoke to me. His brother was the panthaki (the chief priest), he told me, theirs was a family panthak. Their father had been the panthaki before him, and his father before that. The fire here was a dadgah (a lesser fire) but they gave it the due of an adaran, performing the boi ceremony during all 5 stages of a day. Due to their advancing age and ill-health, they couldn’t perform other ceremonies, priests had to be called from other cities for them.

They lived in a ramshackle building opposite the agiary, the priests’ residential quarters. It was badly in need of repair, but the Anjuman didn’t have funds. Their room was holding up, but another one was in bad shape. The dharamsala, also in the agiary complex, was in a similar state, and had been shut down. One room was in an okay shape, and a cousin of theirs lived there. Solapur had a dohkma too, but that was now converted into an aramgah (a burial ground). To raise funds, the Anjuman had constructed shops on the boundary wall and let them out, but the rent hadn’t been raised in years, and a few shopkeepers had defaulted on that too.

There were many Parsis in Solapur once upon a time, the younger brother told me, working in the mills that used to dot Solapur and in the Railways. But when the mills started shutting down, opportunities in Solapur had dried up. About 70 Parsis remained now. Most of them were retired, a few were in business. I should meet Philly Lal, he told me. He owned a wine-shop near the agiary, and was also a trustee. He would be able to tell me more.

The agiary gardener who took me to the Lal house pointed out a shopping complex and told me the Lals used to own all that land once. A signboard announced Lal in big bold letters over a country liquor shop. Behind it was the Lal residence.

Philly Lal was 40 or so. He was married, his wife was Parsi. But she was not from Solapur, she came from Valsad in Gujarat. They had a son who was 13. His successful family business, he told me, was what made him stay back in Solapur. The wine shop was an ancestral occupation, and it enjoyed immense goodwill among the populace. He could, if he wanted to, transfer his license to Pune, and set up shop there, but he would then have to begin from scratch, probably in not so prime a locality. It didn’t make economic sense to shift just for a better lifestyle.

The biggest problem Parsis were having in Solapur was finding a mate for their young men. Girls just weren’t ready to move to Solapur, they preferred the ‘hi-fi’ life of Bombay and Poona instead. Philly told me of his cousin who was finding it especially hard to find a Parsi wife.

Another problem they had was a shortage of funds. The priests here had become old and couldn’t perform all the ceremonies the community required. Priests had to be called from Bombay or Poona for navjots, weddings, funerals or jashans. The Anjuman couldn’t afford to attract a full-time priest from Bombay. After all, they just couldn’t retire the two priests who had served them for so long, and would have to continue to provide for them, even if a new priest was brought in.

Most of the Parsis in Solapur were people retired from the mills or the railway. Some had their own houses, some stayed at an Anjuman Trust property called the Boyce Buildings. There were three families into business, the Lals themselves, the Iranis who ran Goodluck Stores and the Darukhanawalas who owned a petrol pump. I met Mr. Darukhanawala next at his petrol pump, Naval & Co. He was 70, his son helped him out with the business. And because of the business, he had never thought of moving out. He didn’t see much of a future for the community in Solapur. The retired people were carrying on on pensions or had started small businesses like a Xerox shop or ice-cream shop. It didn’t bring them much income, it was more of a way of spending their time. After they die, it would be just the three families in business that would remain.

It was late evening by the time I made my way to the Boyce buildings. It looked like any Parsi Trust building you find in Bombay or Poona, but for the absence of children playing in the compound. A power cut was on, and a veil of darkness was descending upon it. Outside the compound, a Parsi man sat at his ice-cream shop waiting for customers. I didn’t feel he would be able to add anything to what I already knew, it was the wrong time to meet people anyway, and I decided to go back to the railway station. 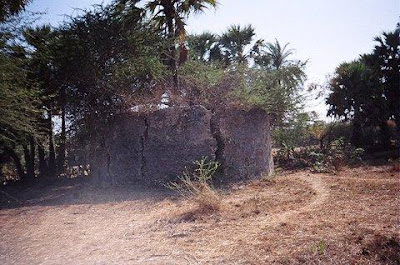 Tower of Silence in ruins, Tarapore
Posted by Kaevan at 2:57 AM

Wow....what a sad picture you have painted. I was a child in Solapur growing up with these Parsis, I went to "GoodLuck Store" as a kid, Lal (wine shop) was a friend of my grandfather, many of the names you quoted, sound familiar and its such a shame to see them as a dying breed. I wish they somehow mingled with the other Parsis and kept that torch burning.

I happen to be in the city for a two day business trip. During one of my morning walk, I came across a beautiful yet deserted building next to Solapur NCC office. I checked with local youth, they could not give me any clue about the owner. One old gentle man told that this belongs to a man called Jeevan Mohan, erst while Parsi rich fellow with TomTom. I was surprised to gather that Parsis has contributed to the city of Solapur. But not a single street named after them, neither there is a library where you have mentions of them. Indian cities are losing their vibrancy. Thanks Umrigar for keeping us breathing with these pieces of history.