This is not the script for a film. But somewhere in all this material lies my diploma film. Certainly, this is the subject for a long documentary, which is why it took me so long to decide to make it the subject of my diploma. Saying everything I have written out here in 20 minutes on film is not going to be easy. My research now has to be distilled into a film.

Before I saw Tarapore, the film that was emerging in my mind was a fictional story but based on what I had seen and heard. A work of fiction that could also have easily been the truth. I thought of making it about three characters who were the last Parsis in their respective towns. A retired railway driver in Daund in his 60’s and his wife and daughter, packing his belongings and bidding farewell to the place where he spent all his life, for reasons of health. A middle-aged unmarried man, who’s not a priest, but whose job is to look after the agiary in Satara, even though he’s the only Parsi there, because his employers, an old family from Satara, though they have moved out would like to keep the agiary going for sentimental reasons. And a young man in his 20’s who’s married to a non-Parsi and runs his family’s ancestral liquor business in Nagar.

This story, however, didn’t excite me enough. It seemed the logical, obvious outcome of the research I’d done, but it sounded clichéd, boring, something done before. However, when I saw the ravaged state of Tarapore, I knew I had found the story I was looking for. And from making a fictional work, I decided that showing the reality in Tarapore was the best way of transposing these twenty-five pages of written material onto celluloid.

To make a documentary though for a diploma film with all its attendant constraints is a difficult task. I do not have the luxury of shooting hours of footage and constructing the film on the editing table. I will have to make the film before shooting. For this, I now need to articulate what I have seen and heard in Tarapore in context with my larger theme of survival and extinction. This is my next task.

As I write these pages, I also realize that this is my story too. A story of a personal search into my roots and identity. This is a story I have yet to explore, and maybe I can tell it along with the story of Tarapore.

Hidden in these pages, then, is my diploma film. As Michelangelo said, “ Every block of stone has a statue inside it and it is the task of the sculptor to discover it.” And so I intend to chip away at my block of material till I discover my film. 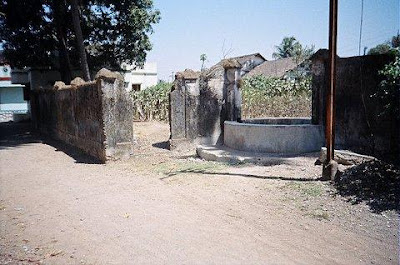 Parsi house in utter ruin, Tarapore
Posted by Kaevan at 1:58 AM

I read through your writings on all the places where Parsis are long gone from there........makes for very deppresive reading. With your flair for good writing you should also write about places where Parsis are thriving and mutiplying. In New Zealand we have some 1200, and 50% of these are regulars with two Associations, one traditional (a smaller group of around 150) and the other liberal with a larger membership. All Parsis here count for a 98% employed or self employed....this is because the New Zealand economy is so well planned that some even work from home- telemarketing, quality audit of shops, taking phone surveys......these involve the retired +60s, although the plus 60 NZ-Kiwis also work as Security, drive buses, shop assistants, parking patrol etc etc......because they were brought up in a healthy environment and highly optimistic people and very healthy at 70s and 80s!! Back to the Parsis here, they meet regularly for jashans and gahambars...most young priests volunteer for jashans ....so a jashan here at the "unconsecreted" dadgah will see some 15 priests taking part in the jashan!!! For a token fee these young priests will come to a house for a "private " jashan. On sunday evenings some 12 youngsters of priestly families gather at the dadgah for training before going to India for their navar training and ordination. Most young Parsi couple have 1 or 2 children; but the problem remains for those many who want to marry within the community........there are no matches! I think the situation is similar in Australia, Canada and USA..........90 to 95 % in employment/self employed or business, 60 to 70% married with atleast 1 child.....ofcourse some 30% married to non-parsis but very very keen that their child be a Zoroastrian. Perhaps the future of Parsis lies outside India, perhaps.
Geve

I am a Punjabi Hindu woman currenly living in USA since last 15 years and am very much interested to know more about the history and lives of Parsis in India.
Some Irani muslim friends of mine here in USA very eagerly question about the Parsis in India too.
We have recently read a lot about their origin, practices and beliefs and wish the very best for this peaceloving, intelligent and enterprising community who has been very loyal and has contributed significantly to the Indian society.
The author has done a commendable job in visiting all these places and compiling details about the Parsi families left .
The pictures say a lot about the sad situation.
It is heartening to know that the Parsi communitiy is doing well in other countries outside India.
May God provide you all with the strength and wisdom to unite and prosper in all ways of life.
Best Wishes.