Back in India, I got busy with other workshops and exercises, and this stayed off my mind for a while. But as things got quieter and I found myself with nothing much to do, I decided to explore the subject further. Armed with the addresses of the agiary and the Anjuman in Satara that I found in an old directory of Parsis in Pune (along with the address and telephone number of almost every Parsi in Pune, it also listed the addresses of every Parsi agiary, dharamsala and Anjuman in the world), I took an ST bus one Sunday morning and set off.

The Satara agiary was easy enough to find. Even without the two plaster afargans (holy fires) adorning the gate, it had the unmistakable air of a small village agiary, with a red tiled roof and a staircase of a few steps leading to a small porch. The agiary was locked though. But tucked away beside it, amidst the trees that covered it was a small house, probably the living quarters for the priest. I knocked on the door and was welcomed in by Yazdi Tarapore.

The room inside was simply furnished. A few chairs, a table, a TV. Yazdi Tarapore too was as unassuming as the room. A simple man in his mid-forties, he was simply dressed in a shirt and trousers and prayer cap. A very ordinary man, you wouldn’t give him a second glance if you passed him on the road, his only arresting feature a nervous tic that manifested itself as a constant wink. He wasn’t from Satara though and he wasn’t a priest. He was a para-mobed, a non-priest trained in some of the duties of a priest to meet the shortage of priests in the community, and his job was to tend the fire here because no priest was ready to leave his comfortable life in Bombay and come down to dry, dusty, hot, sleepy Satara.

Yazdi seemed starved of company, and was eager to talk. Not many Parsis passed this way. In fact, there were hardly any left in Satara. Just two families – the Coopers, who owned a foundry and other businesses, and the Satarawallas, who were builders. Yazdi was employed by the Coopers to look after the fire and attend to other religious ceremonies. They visited the agiary a few times a month, the Satarawallas hardly ever due to an enmity with the Coopers. There were many Parsis here once upon a time, he told me, that’s what he’d been told. The whole street used to be full of houses belonging to Parsis, and the agiary was almost a hundred years old. There was a dokhma too, but it was lying disused now. In case of a death, the body was taken to Poona instead.

Yazdi came from Tarapore, a coastal village like Davier, north of Bombay. He didn’t complete his studies, and worked on fruit orchards owned by Irani farmers in Dahanu and Bordi. He also used to help out at the agiary in Tarapore, and that was how he came to be a para-mobed. He tells me the situation was the same in Tarapore. Hardly anyone was left there, everyone had moved to Bombay or elsewhere.

After we talked a while, Yazdi suggested we visit the agiary. He unlocked the door, and while I performed my kusti prayers, he changed into his white robes. The transformation was startling, Yazdi was a changed man. He had lost his ordinariness, and had acquired a new-found dignity. It was not the dignity that the robes conferred on whoever wore them, for I had seen many priests in my life, including high priests with long flowing white beards, none of whom had had this effect on me. This was something different, something difficult to describe in words. And when he entered the keblah and started praying, it was with the utmost dedication, each word enunciated with great devotion that filled one’s soul and moved one’s heart.

Back in his civvies, Yazdi was again his unassuming self. He talked about the little things in life that bogged him down. He would have liked to do some work to fill his time, his duties at the agiary did not take much of his time. He has asked the Coopers to give him some work at their factory, but he knew it wouldn’t be possible. He could see that the locals had great regard and respect for him due to his position as the sole Parsi priest, the pujari as they called him, and out of deference to that position, a regular job was out of the question. But he had started planting pomegranate trees on the agiary estate using drip irrigation, putting his earlier knowledge from the Irani orchards in Dahanu to good use.

More than anything else, Yazdi told me, he would like to get married and have a companion. He had made many efforts, but they had all been unfruitful. No one was ready to share with him his simple life in Satara. He knew that nobody from a city would like living in Satara, but even those from the villages wanted a more vibrant life. There was someone here in Satara who indicated she liked him. But there was nothing he could do about it because she was not a Parsi. He knew it was the trend these days to marry outside the community, he called it ‘mix masala’, so it might have been forgivable for him to do so in these liberal times. And yet it was unforgivable, given his position as care-taker of the holy fire.

And I began to understand that though he came to Satara only for a job, somewhere down the line, his work had become important to him, it imparted to his life a much-needed meaning. And maybe that was what gave him the dignity when he put on those white robes and recited his prayers. I left Satara, but the image of Yazdi and his overwhelming presence in his priestly robes and the effect of his carefully-recited words refused to leave me. 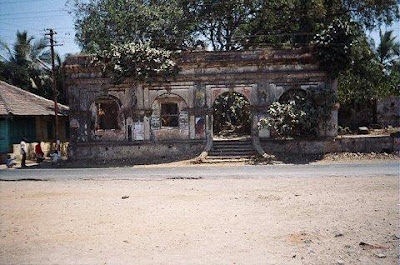 Parsi mansion in ruins, Tarapore
Posted by Kaevan at 3:16 AM

What a beautiful mansion. Very sad that there is no one to use it.or renovet it.