My first stop was Ahmednagar. The agiary, again, was locked. The chasniwala (an agiary labourer) was working in the garden, and seeing me, went to fetch the key. I looked around the complex meanwhile. In addition to the agiary building, there was a community hall. Above that, there were rooms, probably the dharamsala, and behind were houses where a few families stayed, including those of the chasniwala and the priest. As Fardun, the chasniwala, unlocked the agiary doors for me, he explained they kept them locked to prevent outsiders from entering when no one was around.

Fardun was not from Nagar. He had come here two years back from Navsari to work in the agiary. Neither was the priest, Freddy Randeria. He had come from Bombay a few years back. They weren’t able to give me much information other than that there were 40-50 Parsis left in Nagar, and directed me to the Nagarwallas who were the oldest Parsi family in Nagar.

I met Zavareh Nagarwalla at the site of his ancestral wine and cement business in what must be the heart of Nagar town. It was an old building, giving testimony to the fact that it houses an old business. Zavareh, though, was young. Thirty, married to a Punjabi girl from Nagar, and had a daughter. Our conversation kept getting interrupted as customers kept coming for cheap liquor, and Zavareh took time out to maintain the ledger and manage the cash-box. He told me the family business was the reason why he had opted to stay put in Nagar. He had been working in Pune for a short while earlier, but his father could not manage the business alone, and he decided to return. He spent most of his time at the shop, from afternoon to late night, though the business, he said, only brought him a small part of his income despite all the hours he spent here. Their main income now came from investments which he managed from a small office at home during the mornings. There wasn’t much to do in Ahmednagar for young people, he told me. There was a club in the Army cantonment, and twice a week they screened films, one in Hindi and one in English. That’s about all the entertainment there was.

Zavareh was a trustee of the Ahmednagar Parsi Anjuman. He told me there were about 10-12 Parsi families in Nagar, together they would be totalling around 70, everyone included. The Anjuman had enough money and could afford to keep two priests fulltime and a chasniwala. They had recently advertised for another priest. He told me his father would be the best person to talk to about the history of the Parsis of Nagar, but he was busy with something else right then. He told me I should visit Aurangabad too, there were a few Parsis there too, and asked if I would like to meet other Parsis till his father returned. And he sent me to meet the Daruwallas (name changed on request).

The Daruwallas lived in a dilapidated house amidst a predominantly Muslim locality. It was a huge property, where many used to stay earlier, but now it lay unused and almost in ruins only housing three people – Faredun Daruwalla, his wife Yasmin and his daughter Sanaya (names changed on request). Faredun’s parents had moved to Nagar from Mumbai. His father’s sister had married into the Irani family in Nagar, and his parents had followed her here. They still had a house in Mumbai. His son stayed there now. Faredun himself had been away from Nagar for a long time, working in shipyards in the Middle East. When things didn’t work out for him there, he chose to return to Nagar. Where else will you find a climate like this, he asked me. He now dealt in real estate in Nagar, and was building a house for himself. He was looking for a suitable buyer for the property he currently lived in.

Faredun and Yasmin would be somewhere in their forties, Sanaya in her early twenties. They told me their story. The property belonged to the Iranis. They were three brothers and had been engaged in various businesses. They had had a petrol pump, a hotel, a shop and a lot of property. Some of it they had been cheated out of by partners, some property had been encroached upon. Business had slumped after Independence as what once used to be the better part of town began to be encroached upon by Muslims, the hotel began to lose money and business soon ceased. Most of the family had migrated to Bombay and abroad in search of other opportunities, others had died, now they were the only ones who remained.

Faredun took me to the dokhma. It was a vast property, it had been donated to the Anjuman by a benefactor and they had just sold a part of it to raise money for the upkeep of the agiary. On part of the land they planned to construct buildings where people from Bombay and Poona in search of a better quality of life after retirement could shift into. He asked me if I thought people would be interested, he thought they would.

Faredun showed me around the dokhmas, there were four of them, three in ruins. The sole one standing too was about a 100-150 years old. There were no vultures any more, and so they had started a small burial-ground in the premises too, for those who wished to be buried. He told me they were a progressive Anjuman that way.

Back at Zavareh’s shop, I met Zavareh’s father Behram, or Billie as everyone who used to call him. He took me home, and on the way elaborated on his family history. His ancestor had come to Nagar from Surat in 1809, accompanying the British army as a supplier of soda-water. After the British took over the Ahmednagar Fort from the Dakhani rulers, he had set up his business here, and Billie told me proudly that they still did business under the same name, Cursetji Nusserwanji & Co.

The Nagarwallas used to be a big family, he told me. There was a time when a hundred of them were staying in the same house and eating from the same kitchen. But after that, branches of the family had squabbled among themselves, taken their shares and left for other cities. Their business had collapsed due to the infighting, and his grandfather, wanting to resurrect it, had bought the goodwill from the old partners and restarted it. During Prohibition, he had diversified into cement. He repeated the same thing Zavareh had told me; the businesses now brought him only a small part of his income.

A big problem Parsis were facing in Nagar because of their dwindling numbers, he told me, was encroachment of their property. His own land had been encroached upon, and he was now fighting that in court. He told me that he had been threatened by the encroachers. What will you do, they had told him, you Parsis are so few and we are so many. In fact, the police hadn’t been willing to register his complaint, they had been paid off by the encroachers and he had had to offer them a bigger sum of money than what they had been paid before his complaint was noted.

He told me the fear of having his land being encroached upon and taken over was what was forcing Faredun to stay put in his ruined house, even though his new house was ready. Faredun couldn’t move out till he found a buyer, for the moment he vacated his house, the encroachers would move in.

I asked him about the history of the Parsis in Ahmednagar. He told me that his wife had chronicled the history of each of the families here, but he was unable to find it. Still, there were a lot of Parsi businesses here, once upon a time. The Ahmednagar Power House was Parsi-owned before it became MSEB. It employed quite a number of Parsis. There were Parsis in other nearby towns and villages too, having their own businesses or working in the sugar factories.

Billie talked about the agiary in Ahmednagar. He told me that a community needs a place of worship to keep it going. And unfortunately, in most small towns, there was a shortage of priests and funds. Luckily, Ahmednagar didn’t have such a problem. The dokhma lands that they had sold recently would take care of the agiary for another 50 years at least. And they would be getting another priest soon. He told me of other Parsi communities in Maharashtra where there were agiaries but no priests to look after them. With two priests to look after the agiary here, one of them could function as a traveling priest, catering to other places a few hours’ journey away. That was his vision, but the other trustees didn’t agree with him. They would rather keep both priests to themselves. 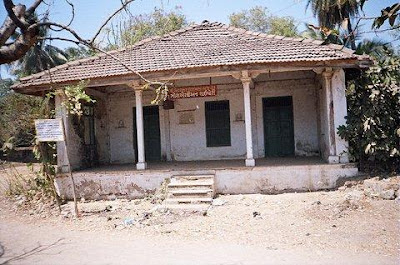 Library in disuse, Tarapore
Posted by Kaevan at 3:10 AM

very well documented. thank you.
but you missed the owners of two leading theatre owners: gangia of vasant talkies and hathidaru of sarosh theatre. Mrs. hathidaru taught me english at the sacred heart convent high school. feroze gangia and tehempton hathidaru - were my class mates.
marcus

Such an interesting post. I went to school in Ahmednagar and I remember socializing with the Nagarwallas. They had a piano and someone played old English songs. Felt like being back in an old 1940s film.