But this subject stayed with me. I was aware there were Parsis who had settled down in East Africa (among other ports both east and west of India) at the turn of the 20th century, and so when I got the opportunity to travel to Nairobi on an exchange visit, I hoped to be able to meet some of them. I had already initiated contact with Thrity, a Parsi girl in Nairobi, through the Internet, and one day, walking along Moi Avenue, a name of a shop caught my eye. J. Rustomji, it said.

Inside the shop, I met Ratan Rustomji. Ratan was old, probably in his seventies or even older. His father had come to Africa from Surat and started the shop. Ratan was born in Nairobi and had never been to India. His family had moved to UK, to Canada, but he had stayed back. He told me that there were around 700 Parsis in Nairobi at the time of Kenyan independence, but now they numbered only 20 or so, the youngest among them 60 years old. He estimated there were a few more in Mombasa, and hardly one or two in Dar-es-salaam, Zanzibar and Kampala. They used to have an agiary in Zanzibar, a club in Nairobi, a dharamsala (rest-house) in Mombasa, but all were gone now. Just the cemeteries remained.

Ratan was wrong about one thing. The youngest Parsi in Nairobi wasn’t 60, she was 30. Thrity was born in Mombasa. From her father’s side, the family has been in East Africa for generations. Her mother came here after marriage from Bombay. Thrity came to Nairobi to study and work. But she didn’t mix much with the Parsis here, she told me, though her parents had a few family friends among them. They wouldn’t like her mixing with blacks, wouldn’t like the hours she keeps, so she stayed away from them. Thrity was looking to marry. There was not much chance of finding a Parsi mate in Africa. There was one in Mombasa her parents were keen she marry but he was about 10 years older. Her options were to marry out of the community, or to marry abroad. Though she didn’t say it, I figured the first option wasn’t open to her. Marrying abroad on the other hand would mean leaving her parents alone here. Meanwhile her career was doing well, and she dreamt of being the CEO of the company where she works. 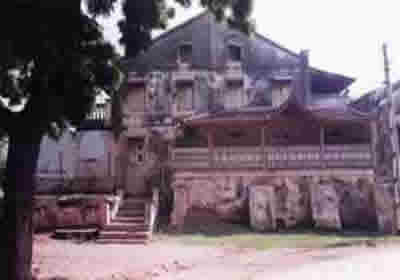 Deserted mansion decaying in Adajan village (c) UNESCO-Parzor
Posted by Kaevan at 3:20 AM