All this while, Daund had continued to play on my mind. Even if there was nobody there now, I hoped to meet somebody who had spent his life in Daund. In Nagar, Billie Nagarwalla had seemed abreast of community affairs in other small towns of Maharashtra and I had asked him if he knew there was still anybody left in Daund. He hadn’t thought so, but I thought of calling him up and finding out if he knew anybody who had stayed in Daund. I also remembered that Dr. Jabbar Patel hailed from Daund, he might be able to tell me about the Parsis there. Hopeful of Daund once more, I remembered that I had seen an address in Daund in the Poona Parsi Directory. I looked it up again. Abadan Irani, Honey Cottage, Daund, it said, and gave an office address as well: Bank of Maharashtra, Daund. On a whim, I checked for an online telephone directory for Daund and found one! I typed in Irani and got not one but two entries. Abadan Irani and Kekobad Irani. I had got lucky.

At Daund station, I called up the number I had for Abadan Irani. A Maharashtrian voice answered. Though the phone and flat belonged to Abadan Irani, he didn’t stay there, she told me, and I could find him at his mother’s house. Her number, incidentally turned out to be the same that I had for Kekobad Irani. When I called up, I found that Abadan had migrated to New Zealand and Kekobad was away in Pune for the day, and would return in the evening. I fixed up to meet Mrs. Irani at 5.

Having time to kill, I explored Daund. It looked like a Maharashtrian version of Malgudi to me, a village that had grown into a small town. I looked around for traces of Parsi life and culture – a shop, a house, a plaque – but could find nothing. There was a big railway settlement though of small, old-style houses. I assumed that most of the Parsis would be staying there.

Mrs. Irani’s house was new, and in a newer part of town, an extension that would have come up only in the last 20 years. It was a big house with a big yard of coconut trees. But one look at Mrs. Irani and you wouldn’t think her to be the mistress of the house. She was a wizened old lady, short and thin, dressed very simply. In a city like Bombay, I would have mistaken her to be one of those poor Parsis who were forced to beg outside the agiaries. She told me she was from Iran, and spoke in a mixture of broken Gujarati and Hindi with some words of Farsi thrown in too. She was born in Zainabad in Iran, and came to India to marry. Her husband’s family was from Shahabad, where they farmed the land they owned. She had moved to Daund only nine years back. Her son, Abadan, used to work in a bank here and had become friendly with a Parsi family here. He had arranged a match for his brother Kekobad with their daughter. Kekobad had built this house. Around the time of his marriage, her husband had died and she had moved here.

Kekobad didn’t stay here, he was only visiting for a month. He was an automobile engineer and had migrated to Canada. Before that, he was in the Gulf. Mrs. Irani stayed alone in the big house. She didn’t trust the locals and kept herself locked in. She was used to a life like this, she told me. In Shahabad, life was the same. Their fields were away in the jungle, and her dogs and chickens kept her company like here now. A servant came everyday; she was her only contact and brought her supplies. Her sons’ friends would greet her when they passed by, and she would greet them back. That was her social life.

I asked her about Shahabad. What was the situation of the Parsi community there now? There used to be Parsis in Shahabad and Wadi, she told me. They even had an aramgah there. But now there were very few left. Her brother-in-law’s son took care of their property there now. He was the only one left, she said. His family stayed in Bombay and he was waiting to sell off their property and join his family there.

I asked about her son’s in-laws. Did they still stay in Daund? No, she said, they had shifted to Pune four years back. Did she have their address? She didn’t but she knew they stayed in the new Parsi colony built next to the dokhmas. I could find them there. His name was Percy Driver. She was the only Parsi left in Daund.

On my return to Pune, I went to meet the Drivers. Percy Driver was in his sixties, his left side paralysed after a stroke. He had recovered enough though to move about in the house unaided, dragging the left half of his body with his right. Just gripping one end of his kusti with his left hand, he managed to tie it three times around his waist by using his right hand. He told me that he had been born in Daund. His father too had been in the railways, and also his grand-father who had been a fireman in Igatpuri. There were many Parsis here during his father’s time, all of them working for the railways. Most of them stayed in quarters provided by the railways, some of them like his father had built houses of their own. By the time he joined the railways as a driver and moved to Daund after an initial posting in Solapur though, there were very few left.

He had three daughters. All were married now, two of them in Canada and one in Poona who stayed in a neighbouring building. It was tough for them in their college days to commute to Poona or Solapur daily for their studies, but they had managed. They would keep suggesting the family move to Poona but they didn’t have the money for that. When he had got his first paralytic stroke, he had taken voluntary retirement though he had a few years left. Five years after that, he suffered a second stroke. They had to commute to Poona almost every other day for treatment, and that’s when they decided to move out. They applied for a house at the new colony being built, and when that came through, they shifted. He still kept the house in Daund though. His daughter went now and then to pay the taxes. It was a small house, it used to have a tiled roof which they had replaced with tin. It was in Shalimar Chowk. His aunt’s family owned houses next to it but they had sold it off. An apartment complex was coming upon it now.

I asked him about community life in Daund. He told me they didn’t have anything there. No agiary, no dokhma, they would have to come to Poona for all that. There was a burial ground for babies though. He didn’t know what had happened to that. There was a man who was taking care of it. He presumed that it had been disposed off now. His wife asked me if I knew Dr. Jabbar Patel, considering I was in films too. Her children had studied with him, she told me. As an afterthought, she asked if I had met Homi Dupetawala there. He was one Parsi who still lived in Daund, and happened to be a tenant of Dr. Patel. He found it cheaper to stay there, they told me, the rent was just 20 rupees a month. He used to work in the docks in Bombay, but after a few problems had returned to Daund. He lived in Shalimar Chowk too. I still had work left to do in Daund! 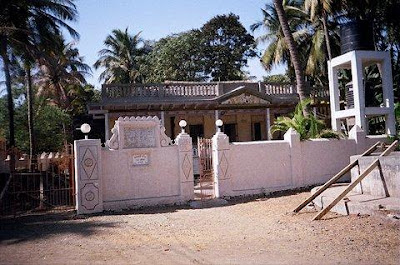 Renovated Dharamsala, Tarapore
Posted by Kaevan at 2:54 AM

Once again a very good post. However there are no photographs of Daund. Does the one you have given at the end from that place?