I next visited Devlali. An old British cantonment, I hadn’t expected to find many Parsis there. But a visit to the agiary proved me wrong. The priest told me there were about 300-350 Parsis in Devlali and Nasik, split more or less equally between the two towns. The population too had remained more or less constant all these years. It would have been interesting to research more into this phenomenon, but since it wasn’t the story I was looking for this film, I left it for another day.

In Devlali, I also met Lt. Dinsha Bhadha, a young army lieutenant who was undergoing training at the Artillery Centre. Dinsha’s father was a Parsi, but his mother was Maharashtrian. Dinsha hailed from Belgaum, and told me I should visit it too. There was an agiary there, but very few Parsis were left there now. Most were middle-aged and unmarried. Anyway, not finding what I wanted in Devlali, I carried on to Igatpuri.

In Igatpuri, I didn’t find anything that I hadn’t encountered at other places. The priest’s wife, who I met at the agiary, told me there were hardly any Parsis left now. Just one or two Irani families, who ran the canteen at the railway station. People from Bombay had bought land here and built houses, which they visited sometimes. When she had newly married and come here, there were more. And her mother-in-law kept telling her about when Igatpuri was full of Parsis and Englishmen, because of the Railways.

Her husband was managing to pull the agiary along, she told me, though the dharamsala next door was being kept shut. She didn’t face any problem being a Parsi here. There was a water problem in Igatpuri, and she allowed them the use of water from the agiary well. People had respect for them and left them alone. 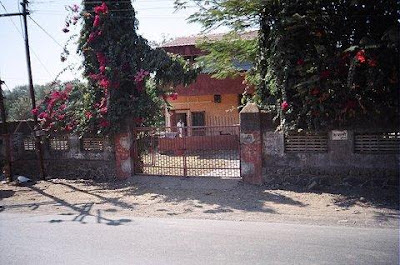 Parsi house of recent vintage, Tarapore
Posted by Kaevan at 2:35 AM