Since I had more or less decided I wanted to shoot in Tarapore, I thought it was a good idea to also check out the situation in Dahanu and Bordi, which were not too far away from Tarapore. At the Dahanu agiary, I met the panthaki, Behram Patel. He told me he had moved to Dahanu 17 years back from Bombay. That time there were a thousand Parsis here, mainly Irani farmers owning chikoo wadis. Now that number had reduced to about 600. A lot of migration had taken place, not only to Bombay but also abroad. Many wadis had been sold too. Most of the population were in their 40’s and above. Young people generally went to Bombay for college after doing their schooling here. Dahanu was a well-off community, he told me. Most of them had farms and bungalows. They regularly had gahambars where people from neighbouring villages were invited.

I asked him about community facilities. Did they have a dokhma? Dahanu had none, he told me. But there was one in a village called Govada some kilometres away, that was shared by the residents of Dahanu, Gholvad, Bordi and Davier. They also used the dokhmas in Bombay, and recently they had started an aramgah in Dahanu itself. There was also a sanatorium near the sea which attracted holidayers from Bombay.

In Bordi, I met Dasturji Sena at the agiary. He told me in Bordi and Gholvad, there were about a hundred Parsis. In Bordi itself, there must be about 35-40. He himself had been in Bordi for only five years. He was originally from Navsari, but had worked in Bombay before coming here. Most of the residents had farms. Opposite the agiary was a resort owned by a Parsi, Pervez Dastur. He was praying in the agiary and I could meet him later.

I had seen a building next to the agiary and inquired if that was the dharamsala. He told me it was not. Flats had been constructed for the use of Parsis by the agiary Trust on their excess land. But they were all locked up, their tenants away in Bombay. Some of the locks, he told me, must have rusted away. They had been lying closed for so long.

I asked him about Zai, a neighbouring village, which was often taken in the same breath as Bordi and which had given its name to the Parsi surname Zaiwalla. Parsis may have land there, he told me, but he didn’t think anyone stayed there any more. I asked him if there was a dokhma. He too told me about the one in Govada. It was still in use, he told me, it had not been abandoned. I asked him if there were Parsis in Govada. There weren’t, he replied, but there were still some left in Davier. In fact, he told me, Davier had an agiary too, but it didn’t have a priest. An old couple used to look after it. There must be less than 10 Parsis left in Davier.

I asked him since Davier wasn’t too far away, couldn’t he also look after the fire in Davier. He told me the President of the Davier Anjuman had approached him for that, but he couldn’t take up the responsibility of two agiaries. His children lived in Bombay and Surat and he often took time off to go visit them, which would not be possible if he had to look after both. Here in Bordi he shared his duties with another priest, they took turns tending the fire on alternate days. But the other priest was old and couldn’t be expected to share the task of looking after the fire in Davier too.

Pervez Dastur too spoke to me about Bordi, but he didn’t have anything to add to what Dasturji Sena told me. He too wasn’t from Bordi but had spent close to 25 years there. He didn’t know much about Bordi’s early history, and said I could meet some of the older residents. They would tell me more.

I looked around Bordi before I left. I saw a sanatorium which Dasturji Sena told me was going full. And I saw many houses that must have once belonged to Parsis, the style was unmistakable. But the gate-posts now announced names of new owners, not Parsi. In Gholvad too, which I passed on my way to the station, I saw pretty much the same sight. Some Parsi houses which still housed Parsis and most others which didn’t. 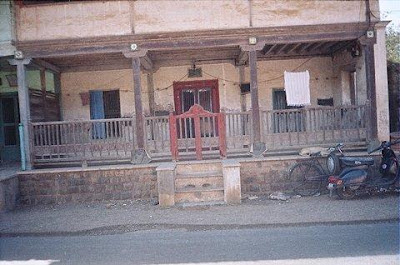 Parsi house in occasional use, Tarapore
Posted by Kaevan at 2:06 AM