I next visited Kalyan. The address I had said Parsi Gully, but all that remained of perhaps an entire street of Parsi houses, now a Muslim ghetto, was just the agiary complex – the agiary itself and three new buildings constructed by the Bhiwandiwalla Trust to house Parsis. The name of the trust sparked another thought. I had forgotten about Bhiwandi. Here was another place to explore.

The complex looked like an old-age home. In the courtyard, retired old men sat on benches and sunned themselves and chatted or just sat silently. I asked one of them, Mr. Patel, about the history of the Parsis of Kalyan. He told me that the best person to tell me about Kalyan was Homi Sethna whose family had been in Kalyan for generations. But Homi was away on work in Bombay, like the other younger residents of Kalyan. Still he could tell me a bit of the present. Half of the flats in these buildings were lying vacant; their owners had homes in Bombay too, and only visited sometimes. Some of the tenants were among Kalyan’s old inhabitants who had sold off their houses and shifted here, others were newer migrants from Bombay. Mr. Patel himself had moved from a chawl in Lower Parel in the seventies when the building came up. There were other Parsis in Kalyan too, people who had moved from Bombay to new housing complexes being constructed in Kalyan, where the rates were cheaper. There was a dokhma too in Kalyan, but it had been abandoned, people went to Bombay now. About Bhiwandi, he had no idea. Certainly there must have been Parsis there once given the name Bhiwandiwalla, but he didn’t know about now.

The priest at the agiary was of little help. He was new there and estimated there were about 40 Parsis in Kalyan. Beyond that, there was little information he could offer me and asked me to contact one of the trustees, Firoze Bharda, who lived in Bombay.

On a later trip to Bombay, I met Homi Sethna. Homi’s family had a house in Kalyan and a liquor business. But the usual family quarrels had put an end to it, and they shifted to the Bhiwandiwalla buildings when they came up. Homi now worked with the Bombay Parsi Panchayat as a custodian of their estates.

He told me that in Kalyan and around, in other far-flung suburbs of Bombay, there were about 200 Parsis. But in Kalyan itself, there were not many. Most were old residents, there were very few people who had moved to Kalyan in recent times. There were Parsis who had bought apartments in new complexes that were coming up, but those were for investment reasons with no intention to settle down there. The buildings next to the agiary had 65 flats, but many of remained locked, their tenants living in Bombay, some visiting on weekends, some not at all. About Bhiwandi, he didn’t have much idea. There must be one or two still there, he felt, but they too probably didn’t stay there, just visiting the property or business they owned there now and then.

I asked him if there were occasions for the 200-odd community members around Kalyan to come together. He replied that there used to be many gahambars (feasts) once upon a time, but in recent years, they’ve been few and far between – just 2 or 3 in the last few years. The trustees just weren’t interested. 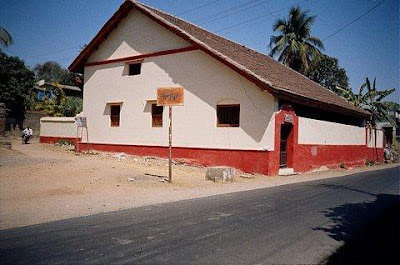 Agiary, repainted and restarted, Tarapore
Posted by Kaevan at 3:04 AM

It is good. But i want to know about one of the parsi person ' rav saheb kaba govind or jayram kaba govind and their family and their heirs. If you have any information, please send me at sjmhatre21@rediffmail.com