There was no agiary in Aurangabad, but I knew that Mehernaaz, someone I used to know in Bangalore, had married into a Parsi family in Aurangabad. I located her address from a friend and got in touch with her. Mehernaaz was in her late 20’s. She had come to Auranagabad seven years back. One of the few people who had bucked the trend of marrying into a small town from a big city, I asked her how she found the change. She replied she had got used to it now. You never like it, she told me, but after a while you don’t mind it.

She introduced me to her father-in-law. Firoze Nariman had a deep interest in community affairs and told me it was inevitable that Parsis would die out soon. He told me of a letter he had written to a Parsi magazine on the issue. It won’t be too long, he had written, before a tourist guide takes people around Kemps Corner in Bombay and points out the Towers of Silence, saying “Once upon a time there was a community called the Parsis.”

He told me that most of the Parsi settlers in the Deccan had come from Gujarat. They were mainly Government contractors, in service of the British, or of the local princes. Parsis were a submissive community, he elaborated, and made loyal employees. I asked him about his own family. He told me his father had settled down in Jalna from Navsari. His father had been posted there by the company he worked for. Following a disagreement, he quit and set up his own business. Firoze had expanded it later on and moved to Aurangabad in the 60’s, setting up an agency for Godrej.

I asked him about Jalna. What was the situation there? He told me Jalna used to be a much bigger town than Aurangabad. It was a trading center, and there used to be many Parsis there. The Jalnawallas used to be the biggest family there. There were more than a hundred of them staying together at one time, and the agiary in Jalna belonged to them. In fact, it was their private agiary, the entrance to it used to be from their home. The Jalnawalla family owned several cotton ginning mills in Jalna, Aurangabad and various nearby towns. But over time, they had dispersed to other cities and to other professions. Now, there were just two old ladies left in Jalna, both in their 80’s. The agiary had been long shut.

Mehernaaz later took me to meet the Printers. We met them at their old hotel, behind their petrol pump. Four Printers spread across two generations, Jangoo and his brother Rumi and their children Burzin and Sanaya, told me their story. Their father had come to Aurangabad from Gujarat (they did not remember which place) in 1907. Starting with a kerosene depot, he began dealing in petrol and started Aurangabad’s first petrol pump in the 1930’s (before that, he used to sell petrol in cans).

There were Parsi families in Aurangabad before them. The Davers must be the oldest ones. They had a contract with the British Government to transport post from Nandgaon to other places in the Deccan. There were no Davers in Aurangabad now. Their old bungalow was in ruins, and heirs were squabbling over the property.

There were about 50 Parsis in Aurangabad, the number had remained more or less constant all these years. Three families accounted for about half of them – the Printers, the Narimans and the Jalnawallas. As people left from Aurangabad, others had come in, from Jalna and other small towns in Maharashtra. There was a time, Rumi Printer told me, when you would find a Parsi family in smaller towns around Aurangabad. They owned cinema theatres and other small businesses. None were left now though.

They had a dokhma in Aurangabad, but no agiary. They had formed an association to manage the dokhma, but constant bickering had put an end to it. The dokhma wasn’t used now, they went to Poona for funeral ceremonies. The dokhma lands were now being encroached upon, but there was nothing the community could do about it because of lack of unity. That was also the reason they hardly met as a community on auspicious occasions.

The biggest problem they faced was the lack of an agiary, or to put it more accurately, a priest. Priests had to be called from Bombay and Poona to perform ceremonies, and they generally wanted to return as soon as possible. If the agiary in Jalna had still been functioning, they wouldn’t be having much of a problem. 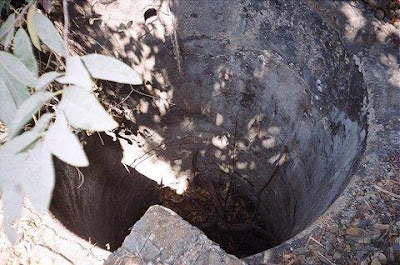 Abandoned household well, Tarapore
Posted by Kaevan at 2:29 AM

Touritor is the best when you are going to plan a Agra tour.We provide Top Tour Guide in Aurangabad.

Get best deal to Visit the Most Historical Places in Aurangabad with Touritor.
Ajanta and Ellora Tours
Aurangabad Tourist Guide

Thank you for sharing this information.
Tourist Guide in Aurangabad
India Tour Guide