Next on my itinerary was Mora Bunder at Uran, a small fishing village across the harbour from Bombay. The agiary wasn’t far from the jetty, and as I walked towards it I saw a couple of houses that looked unmistakably Parsi. Again, I found the agiary locked. Going around to the back, in one of the buildings in the complex, I met Kersi Sui.

Kersi Sui was the only Parsi left in Uran. He looked after the agiary, though he was not a priest. He told me how he came about this. His parents had come to Uran from Navsari to manage the sanatorium in the agiary complex. The agiary fire was a dadgah, and therefore laymen could tend it too. So whenever the priest had to go to his home-town, he entrusted the fire in their care. The trustees didn’t have enough funds, and neither the Suis nor the priest drew much of a salary. When the priest quit, no one was ready to work for the pittance offered. Rather than let the fire die out, Kersi began to look after it.

It was quite a struggle, he told me. The original trustees couldn’t spare the time to manage the agiary and had handed over the trust to the trustee of the Bhiwandiwalla Trust who also managed the agiary in Kalyan. Kersi had gone to meet him to discuss the future of the agiary. He was told categorically by the Bhiwandiwallas that the original trustees had not left enough funds to look after the upkeep of the whole premises. But, at the very least, they would make sure of a regular supply of wood for the fire. After his death though, even that dried up, and Kersi had to put out constant appeals for funds to the Parsi public.

Kersi didn’t know much about the history of the Parsis in Uran. The agiary was a 100 years old, so around that time there must have been enough Parsis. He didn’t know what occupations they were involved in, they probably owned land here or were in the liquor trade. With World War II, the Government took over a lot of land to set up a naval station (the dokhma lands now belonged to the naval station), and Prohibition also would have wound up businesses. Land then was very cheap, and after moving to Bombay, the residents wouldn’t have thought twice about it, and the care-takers who had been entrusted to take care of the houses, slowly started grabbing them.

There were not many Parsis in Uran when Kersi was growing up (none of the original residents remained, just their houses remained vacant, slowly getting encroached one after the other). Most of them were those who were employed with Grindwell Norton in its factory next door. Norton used to be Parsi-owned, he told me, and had many Parsis in its employ. Now, the company was in Maharashtrian hands, and had just two Parsi employees in Uran. One of them stayed here, the other had moved to Vashi. Till a few years back, Kersi and his mother were the only permanent Parsi residents. Now after his mother’s death, he was the only one.

More than anything, Kersi bemoaned the loss of property through carelessness. None of the legal heirs to the Parsi properties here had papers to the houses. He claimed the navy was ready to hand over the dokhma if they could prove ownership. But no one knew where the original title deeds were. The agiary lands would have been encroached too if he hadn’t stayed around.

Kersi was 52, but looked 40. He used to run tuition classes for a living. Now he left it to others to manage, just going there in the evenings. He was married, but his family didn’t want to stay in Uran. They stayed at Vashi, with his wife’s parents. Now she wanted to move to Canada, he told me. I asked him if he decided to do that, what would the future of the agiary be? He wasn’t too worried about that. Someone from his family, one of his brothers, would pitch in. This was where they had grown up after all. 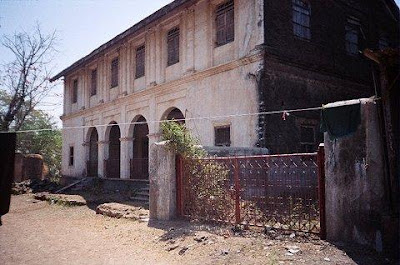 Locked-up Parsi mansion, Tarapore
Posted by Kaevan at 2:41 AM

Some Comments
1)Grindwell Norton is not a Maharashtrian Company. It is a Public Company. It's MD is a Maharashtrian married to a Parsi. Her family were the promoters of Grindwell Abrasives which later joined hands with Norton USA.
2)Grindwell Norton exists today on the site occupied by Bharat Tiles which in 1956 relocated to Kurla a Bombay suburb.
3) For years priior to 1956 the President of the Uran Municipality was a Parsi, Shapurji Madon. This gentleman was also the Manager of Bharat Tiles and he employed a number of Parsis.